OTTAWA, February 3, 2022 – Staff of Canada’s nuclear regulatory agency, the Canadian Nuclear Safety Commission (CNSC), have recommended approval of a controversial giant above-ground nuclear waste dump for one million tonnes of mixed radioactive and hazardous waste alongside the Ottawa River. The recommendation was contained in a licensing document and environmental assessment report released on January 25. Citizens’ groups say the document is seriously flawed and vow to fight the recommendation in licensing hearings scheduled for February 22 and May 31, 2022.

Ole Hendrickson, scientist and researcher for the group Concerned Citizens of Renfrew County and Area, said the CNSC “has failed to assess the project in an objective and scientifically credible manner.”  Hendrickson noted a number of “critical omissions in the document” that he says “make it impossible for the Commission to make a sound decision about whether or not to license the dump.”

“The recommendation to approve this dump, given that it would leak and eventually disintegrate, is reckless and irresponsible on the part of CNSC staff,” said Johanna Echlin of the Old Fort William (Quebec) Cottagers’ Association. “The CNSC is supposed to protect Canadians from radioactive pollution created by the nuclear industry, not enable it,” she added.

Some of the critical omissions in the environmental assessment report noted by citizens’ groups include the following:

Echlin and Hendrickson point to previous studies by the dump proponent that identified many ways the mound would leak, and described the inevitable disintegration of the mound within 400 years through a process of “normal evolution.” Leakage from the dump is expected to flow into surrounding wetlands that drain into the Ottawa River less than a kilometre away, contaminating a drinking water source for millions of Canadians downstream. 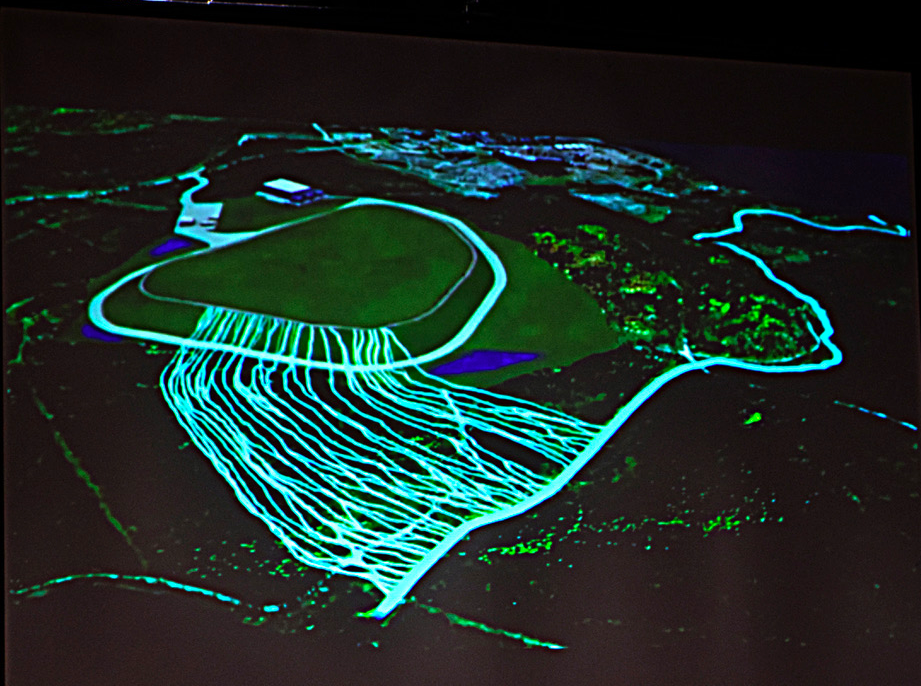 (Photo above from Radio Canada Découverte, March 2018, showing the mound overflowing as part of the degradation and erosion process, described by the proponent in its Performance Assessment report.)

According to Hendrickson, “CNSC has outdone itself in promoting the dump project.  This is an object lesson in what happens when government agencies are captured by the industries they are supposed to regulate.”

The release of the environmental assessment report marks the end of a long “underground” phase of the licensing process for the giant radioactive dump, called the “NSDF” by the proponent, Canadian Nuclear Laboratories, owned by a consortium of multinational corporations that run Canada’s nuclear laboratories under a contract initiated by the Harper government in 2015.

Opportunities for public comments on the project’s environmental impacts ended in August 2017 after a flood of negative comments and concerns from First Nations communities, civil society groups, municipalities, independent scientists and individuals.

The Assembly of First Nations, and more than 140 downstream municipalities have passed resolutions opposing the dump plan. Members of the public will have their final opportunity to submit concerns about the proposed project at the “Part 2 licensing hearing” that is scheduled to begin on May 31, 2022.

“Interventions at that point are very unlikely to influence the Commission’s decision,” says Hendrickson, adding that “it is basically a rubber stamping process.”  A planned environmental assessment hearing that was to have preceded the licensing hearing was canceled by the CNSC.

April 11 is the deadline to apply to “intervene” inn the May 31 public hearing. Interventions can be oral or written.  Information about the intervention process is available here. If you are submitting written comments, your final intervention must be submitted with your application. If you wish to make an oral presentation at the hearing, you need to submit an outline of your presentation by April 11.